On Feb. 23, 1922, popular catcher Pickles Dillhoefer died from typhoid, which hospitalized him just five days after he was married. Here is the Post-Dispatch original story from that day.

William Dillhoefer, catcher of the St. Louis Cardinals, died at 8:25 o'clock this morning at St. John's Hospital, where he had been ill since Jan. 19.

Typhoid fever was the cause of death.

Dillhoefer, whose home was in Cleveland, was married Jan. 14 at Mobile, Ala., to Miss Massie Slocum, a school teacher. Returning to St. Louis with his bride he became ill a few days later, and on Jan. 19 was taken to the hospital.

Dillhoefer was 28 years old. He came to the Cardinals from the Philadelphia National League club in the deal which brought Milton Stock to St. Louis.

Dilllhoefer was one of the most popular players in St. Louis.

Although not a catcher of surpassing brilliance he had such a fighting spirit, boundless enthusiasm and excellent base line coaching qualities that he was considered one of the club's best assets, on the field and at the box office. 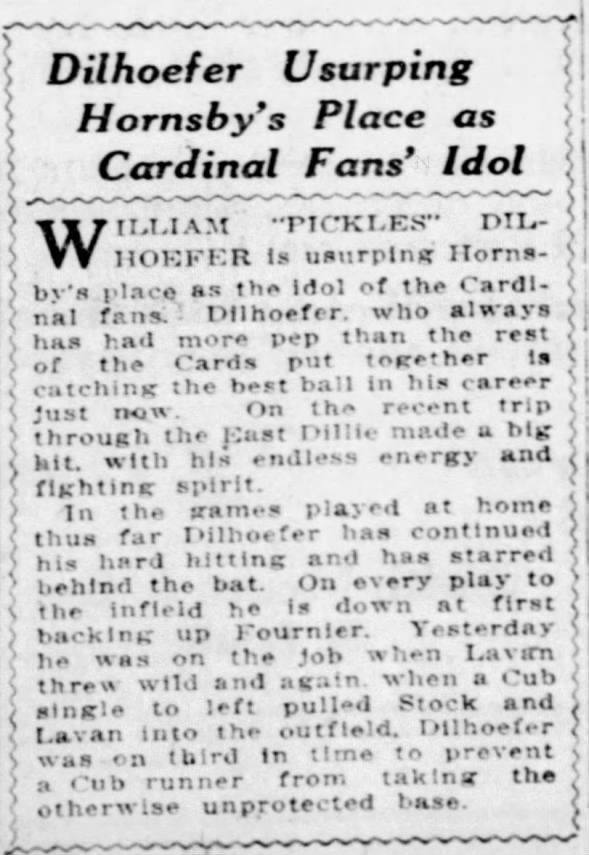 His expressions of hope when on the coaching line brought many laughs from the grand stand. A favorite yell of Dillhoefer's came when two batters were out and the stands had about given up hope. Then came the loud voice of the Cardinal catcher, bawling, "Only two down, Stockie, give it a ride."

So closely did he follow the game that frequently he got into trouble with the umpires for his over-eagerness. Frequently when catching he would run half-way into the outfield to see that the outfielders did not interfere with each other in the fielding of a fly.

Also when on the bench, from which he was not supposed to emerge when the opposing team was batting, he would dart out at critical moments to coach a fielder. After his purpose had been accomplished he would realize his rule infraction and would sheepishly scurry back to cover.

So popular did he become with the baseball followers that they would yell for "Pickles," as he was familiarly known, to be assigned to the catching position, even though it was generally admitted that Clemons, the other Cardinal backstop, was a better catcher, mechanically.

Dillhoefer's body was taken to a chapel at 5165 Delmar boulevard, where services will be held, at 7 o'clock this evening. Ed Dillhoefer, a brother of the dead player, said the body would "be seat to Mobile, the home of William Dillhoefer's wife, where the funeral will be held Saturday.

Note: The intro of this story was corrected to say that Pickles was hospitalized five days after he was married.

From A-Z: The coolest Cardinals names of all time.

This article originally ran on stltoday.com.

Welcome to the discussion.

Keep it Clean. Please avoid obscene, vulgar, lewd, racist or sexually-oriented language.
PLEASE TURN OFF YOUR CAPS LOCK.
Don't Threaten. Threats of harming another person will not be tolerated.
Be Truthful. Don't knowingly lie about anyone or anything.
Be Nice. No racism, sexism or any sort of -ism that is degrading to another person.
Be Proactive. Use the 'Report' link on each comment to let us know of abusive posts.
Share with Us. We'd love to hear eyewitness accounts, the history behind an article.

You don't have any notifications.

Get up-to-the-minute news sent straight to your device.